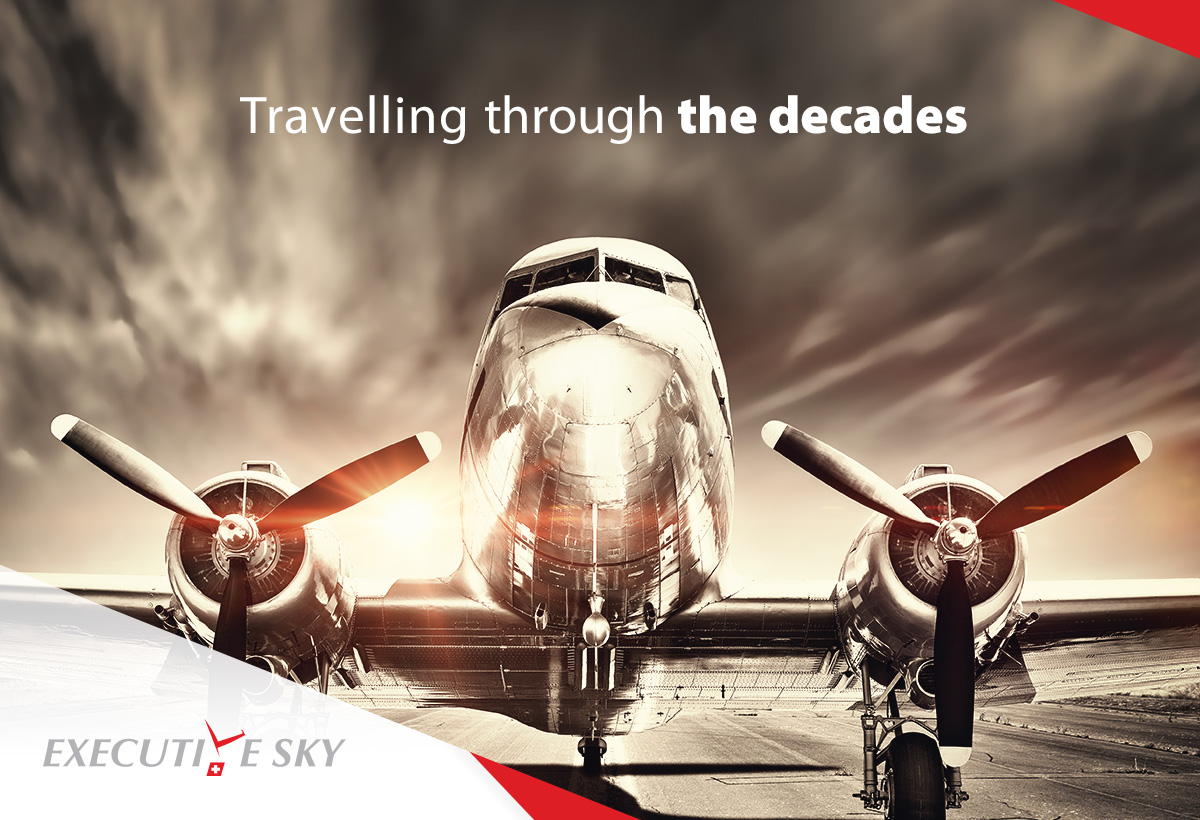 Air travel and the aviation industry in general has experienced drastic changes throughout the decades. From the very first flight ever operated in the early 1900’s, to roast beef, lobster and alcohol served in fancy glassware in the 1950’s, through to flying as we know it today, featuring touch screen entertainment systems. Taking all of this into consideration, it’s clear to see the changes and that air travel has come a long way.

During the 1920’s planes were notorious for shaking loudly and were unpressurized. This era was the first for aircraft to exist, designed for transporting passengers. Generally in this period planes carried less than twenty passengers, and reached a 3,000 feet or less cruising altitude. Travelling at only around 100 MPH, planes were actually slower than travelling by train. It was also necessary to make refueling stops often and flights were only permitted during the daytime. For passengers in the 1920’s travelling via plane was usually an uncomfortable experience, because of the loud noises and the cold temperatures, uninsulated sheets of metal were used and shook heavily and loudly in the wind. Despite this air travel began increasing in popularity.

In this era, the service provided to passengers was better and the airplanes had become more comfortable. Female flight attendants were first introduced, and their roles were similar to our present day attendants. Mostly referred to as stewardesses in this time period. Aircraft were heated, soundproofed, and the seats were designed to be more comfortable, being fully upholstered. Cabin space had also increased and seating became more creative, with reclining chairs, and swiveling seats. In the 1930’s planes also flew much higher than they had before, reaching cruising altitudes of around 20,000 feet. This helped in reducing turbulence, and made air travel as a whole much faster. Planes reached speeds of around 200 MPH. In 1938 the first pressurized commercial aircraft was introduced.

Due to the WW2 (World War 2) air travel changed significantly. Aircraft were constantly being developed for the purpose of war, instead of commercial flights. After the war ended, Europe and the United States had a lot of planes, in addition to large airbases and long runways. These aircrafts were then repurposed for commercial flying. Transatlantic flights became a regular daily occurrence and new airports were built. London’s Heathrow Airport being one of them, finished in 1946.

Probably one of the most notorious periods of air travels history, often referred to as the ‘Golden Age’ of flying. It was a time for aircraft with plenty of leg room, and glamorous stewards or air hostesses, and luxury, gourmet meals served to all of the passengers. During this era, flying was far more expensive and even so when compared with today’s pricing. Also the cabin was filled with smoke from cigars, pipes and cigarettes. Maybe a fair price to pay, when considering the highly sought after party lifestyle, with flowing alcohol, fine dining and an atmosphere to be remembered.

One of the most noteworthy things to mention about this time period was that passengers could fly without any form of ID. This enabled them to turn up at the airport, less than an hour before their flight and go straight to their gate. Family members and friends were also permitted to walk through the airport without a ticket, to say their farewells. Security was not obligated before the , and even then the screening very relaxed when thinking about the security measures that are in place today. Generally in the flying became more relaxed and passengers did not make as much effort as in the when it came to dressing up, although it is fair to say they still looked much better than we do today.

Introducing the jumbo jet! During the 1970’s, the skies were much more accessible for passengers who could not previously afford this method of transportation. With airlines now being able to fly much larger amounts of people, this meant they could also sell tickets at much more reasonable costs. In 1973 was when security was first made mandatory at airports. The planes themselves still featured great legroom and stewardesses catering to their passengers need.

Air travel during the famous 80’s was great fun, as one might have suspected. During this time, you could take as much luggage with you as you wanted, checking as many bags as you like. You were still allowed to smoke onboard and meals were included in your ticket price. It was also okay for passengers to visit the cockpit when in-flight and children were awarded with a wing pin, for them to remember their experience of visiting the pilot and the overall experience.

Although the 90’s does not seem so long ago, air travel during the era was completely different to the air travel we are used to in today’s day and age. In this time period, all passengers whether in economy class or business class were able to enjoy the free alcohol on offer on most international and domestic flights. Meals, despite their bad reputation were also still on offer to passengers and seats also featured phones. Noting that this was pre mobile phone era. Entertainment in-flight was in the budding development stages, just coming into existence.

Due to the devastating effects of 9/11 which occurred in 2001. Aviation and travel by air changed significantly. Before this, passengers could pass through security, keeping their shoes on and easily passing through with most items, including liquids, large jackets, small pocket knives etc. After 9/11 took place, security at airports became the strict, regulated processes that we know today. The doors of cockpits on the planes started to become locked and reinforced, and only people with tickets to travel were allowed through the airport and anywhere near the airline gates.

Flying as we know it today

Although in the present day there no longer meals included for all passengers and free alcohol to indulge in, flying first class may be more luxury than ever. In society today, we expect air travel to provide us with all of the same conveniences of today that we have when on the ground. Whether it be touchscreen TV’s, USB charging ports etc.

Air travel has changes dramatically throughout the years and we look forward to seeing what the future will being for the aviation industry and how we can further advance.

One might wonder what all the different light signals, within an airport are. Taxiways and…

Generally referred to as ‘businessaviation’ inside the industry. Many customers and people outside of theaviation…