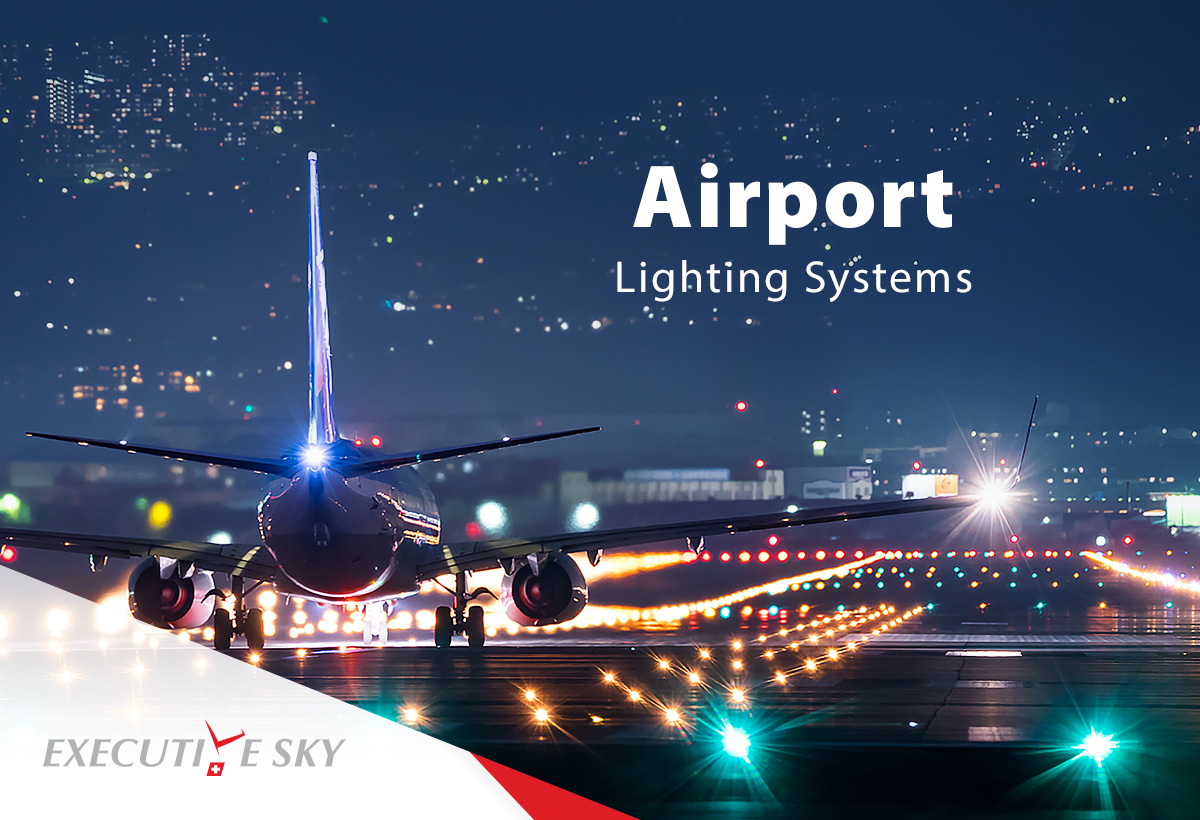 One might wonder what all the different light signals, within an airport are. Taxiways and runways are lit with colorful lights to aid pilots in navigating around the airport. Passengers often notice the array of different lighting used, such as red, amber, green, blue, and white lights seen flashing across the ground. In this article, we will explain some of the lighting systems used in airports and what they mean, as well as how the pilots utilize them.

Often seen from outside of the airport, near the runways, are the orange light poles which are used as part of the lighting system for approaches. There a numerous different configurations for these lights. The design of the approach lights depend on the type of instrument used for runway approaches. Although designs may vary, the purpose of these lights remain the same. They are necessary to provide pilots with visual cues, in order for them to align the aircraft correctly during bad weather landings.

Approach lights direct pilots to the (TDZL) Touchdown Zone Lights, on the runway. These lights are made up of one hundred and eighty in-ground lights, consisting of thirty rows of white lights, down either side of the centerline for the first three thousand feet of the runway. The name is pretty self-explanatory, these lights illuminate the touch down zone where a pilot must land in order to give the aircraft adequate runway space to stop. The pilot will typically go around and attempt landing again, if the aircraft will touchdown beyond this area.

The Aerodrome rotating beacon originates back to the 1920’s and is usually seen in the United States of America and Canada, with the majority of airports housing one of these lighting systems. Generally rare outside of the USA and Canada. They are operational from dusk until dawn and help pilots to locate airfields from miles away. Public airport beacons in the US constantly flash green and white and the different colors are used to identify which type of facility the airport is. White and yellow signals a water airport, and white, white, green shows a military airport, whereas a hospital or emergency services heliport is displayed by the flashing of white, green, and red lighting. This differs a little in Canada, where the majority of airports are identified by rotating beacons that just release one white flash, around twenty to thirty times per minute. Heliport beacons in Canada instead emit a series of four quick white flashes, several times per minute.

PAPI, which is short for Precision Approach Path Indicator is a set of four projectors, each one contains a white light and a red filter, along with exact adjusted lenses. During the final stages of approach, aircraft must fly at around a 3 degrees slope down to the runway, this is known as ‘glidepath.’ The purpose of the PAPI lighting system is to give pilots a way to easily visually verify that the aircraft is on the correct glidepath. All four PAPI lights will be white once the pilot is above the correct glidepath and once on the glidepath the PAPI lights will show two white and two red. If the aircraft is too low all four lights will be red.

The PAPI system is used worldwide. As a passenger they may be a little difficult to spot. Look out for the four lights near the end of the runway, they can be located on either of the sides. The easiest way to view them is at the beginning of takeoff or just before touchdown. All lights will be red, when viewing them from the ground. The pilots will maintain altitude until the moment they intercept the 3 degree glidepath, then the PAPI lights will display two white and two red lights during the final descent to the runway.

The VASI is a lighting system, featured on the side of an airport runway threshold. It is designed to provide visual descent guidance and information during approach. The lights are standardly visible from up to 5 miles away during the daytime and up to 20 miles away at nighttime. The lights are set up around 23 feet from the start of the runway and each light has been specifically designed in order to appear either white or red, depending on which angle it is viewed from. This lighting system works in a similar way to the PAPI lights, and is now being phased out by the PAPI system, which ensures the lights are closer together and therefore works more efficiently and are easier to maintain. Gisborne Airport Barra International Airport Narsarsuaq Airpo

Flight catering is a complex service that falls into the food service industry, catering to…